When it comes to Internet, you must be very conscious about the web browser you use, if you are not novice. People often use what they get with their OS like Internet Explorer for Windows, Safari for Mac OS and Firefox for Linux. For most, the speed matters and the latest browsers are all very fast. The browsers are all good in different manners and that’s what put everyone in dilemma. One is more secure, other is faster and another is much stable. The two Internet Browser giants are Mozilla Firefox and Google Chrome and they have taken a major part of the Internet world of browsers. I personally like Mozilla Firefox but no biasing will be here to make you learn about the two. 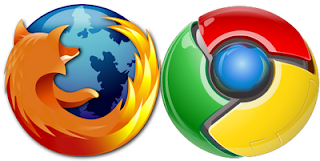 Firefox is an old brand in the browser realm and Chrome is a newer entry. Where Chrome is software of Google Inc, Firefox is a product of non-profit organization Mozilla. Most people prefer one of the two browsers as considering their taste of visual effects and user interface. There are much more things behind their working which prove very important for ones experience. The features, hardware support, languages support make up world-wide standard and enhance functionality of browser. The different aspects thus tell how well Firefox or Chrome is for you. They both, however, run on all three major platforms (Windows, Mac and Linux).

U*ser Interface:* The first thing is the user interface that what marks the impression on the user. Chrome is slightly having a simple user interface and that’s what the same logic which is behind the Google search engine. Therefore, Google Chrome takes less time to open than that by Mozilla Firefox. First time user does not have problem finding any setting option in Chrome. The top-right corner has a settings icon and that covers all the options. Also, the front page of Chrome displays the recently opened websites which pretty impresses and comforts the user.

*Memory Management: *Its one of the most important things which differentiates the two browsers. Google Chrome is very advanced on this plot and fascinates me towards it. For every tab you open in Chrome, there is a separate process which thus provides more stability to the tab while in Firefox there is only one process for all of the tabs. Thus in Firefox, one tab if crashed makes the whole browser to be closed while due to isolation of tabs in Chrome, one crashed tab does not bring down the browser. Also, Firefox is a memory eater. Memory consumed when two tabs are opened in Chrome is same as Firefox with no tabs. Although when tabs are more, Firefox does not consume large memory as compared to Chrome. Closing the tabs one by one in Chrome releases much memory while Firefox has no appreciable release of memory. But for Firefox lovers like me, there is good news that the new Firefox 15 has overcome this mismanagement and memory leaks by add-ons very fairly.

*Extensions: *This is what makes the Firefox users to come back in spite Chrome outperforming it by most accounts. For a geek, programmer or web designer Firefox extensions address the everything which they want to do with browser or web pages. Firefox is open-source software which makes it useful for computer students and developers. Chrome has a flourishing extension gallery too but the support of extensions in Firefox is far much better. One will not find alternatives of extensions when switched to Chrome unless they are famous ones.

*Privacy: *Most of the people shy away from the Chrome because it is a Google product and they think Google has already a bulk of personal information about them. Therefore, they stick to the Firefox. The privacy is a major concern in this era of Internet. Firefox has a Do Not Track header tag option which prevents third party advertisers to track your activities. Chrome, on the other hand, has yet to implement any tracking protection.

*Sync: *Synchronization has also become a very important aspect and a differentiator for most of the browsers. However, both of the browsers concerned are equal on this ability. They, along with bookmarks, sync tabs and add-ons. The extensions also help to sync in between the browsers too.

*HTML5 support and Hardware Acceleration: *As the technology is advancing, HTML5 is emerging to be the competitor of Adobe Flash plug-in. Chrome has a better support for HTML5 features. One point of digression is the HTML5 video. The codec used in Firefox and Chrome is Google’s newer codec WebM which is unproven and not widely used. The browsers are now using graphics processor to speed up the browser actions. Chrome, however, supports only particular graphics cards for hardware acceleration to boost performance.

Choosing one of the two is difficult. Just see which features you want most and which features can be compromised. However, there is no constrain of using only one browser and you can use both as I do. Google lovers would love Chrome because of its integration with Google’s other products and services while geeks would prefer Firefox. But whatever you choose must enhance your web experience and the level of satisfaction. I would love to advise you to adopt any of the browsers for full-time use.

*This article has been published in youthkiawaaz.com. You can check the published article here. *

The Battle Of The Browsers, Mozilla Firefox Vs Google Chrome: Your Guide To A Wiser Choice