Internet is developing at a very fast pace and so its users, but neither of them is matured. They are just growing recklessly without caring what they are for and what would be the consequences of the methods they are adopting.

The era, we live in, is full of people who are mean and greedy. They use unfair means for fulfilling their wrong motives. Internet was made for open use by anyone, yet many are using it unfairly to exploit users’ privacy and developing their monopoly on the Internet.

Mozilla is a foundation who has been involved in the mission of keeping web open. Mozilla has developed an awesome browser, Firefox, which respects users’ privacy over the Internet. With Firefox, one can always be sure that it will not give his data to anyone without his consent.

Firefox is a very secure, fast, reliable and personal browser. The user can customize it the way he wants to feel and use it. And I recommend everyone, who wants independence over the internet, to download and start using Firefox.

And you may say anything, but I love Firefox because it is for me. 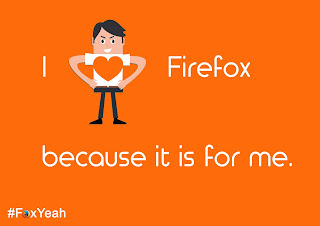