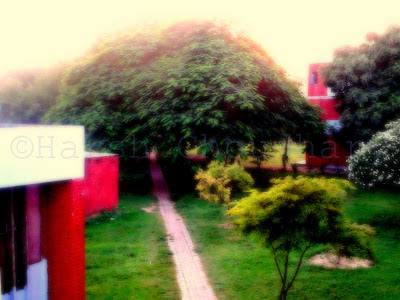 There are the times when I think that I'm gonna win it and the other time, I feel the opposite. Then somehow I get to find out that there is someone ahead of me and that too far. There are the thoughts coming in my mind like which wild card entry he is. The sponsors all matter. But I don't leave the race. I want to win. On the way, I get to know something quite different and strangest of all the things that have happened. The thing is 'even if I win the race I won't gonna get the prize'. The prize would disappear when I will accomplish the race. There are the questions from the sky-"Do you still want to continue?"

Last night, I saw a dream. Yaa, most of the nights, everybody does. There are the times when you wake up normally and then get happy to realize that your world has now been better. There are the other times when you wake up happily but realize that there's nothing left to be happy about. It is quite simple until now. Okay, now imagine you get a contrary dream in the two situations. I mean, when you are not supposed to be happy you get a dream that makes you happy and the same way in the other situation. Now even worse, you get the two situations in the two consecutive days.

You must be thinking "So what's the point all about?" The point is all about the life and dreams. You dream, you try, you fail or succeed. My last dream was having strange things and that's normal to dreams. Dreams always have strange things to do, to show. The image above is blurred and is not as clear. It was made (edited) to give you glimpse of dream.

My last dream was very complex-ed and made me confused. What should be the answer of the question? What is the point after learning that it is not worth it? What if it was just a way to distract me? The dreams are meaningless most of the times. But sometimes they can give you a real-life situation which you can analyze before it actually happens.

Dreams are just to be felt and life is to be lived. How harder the life is but it has to be lived unless you don't have the option other than suicide. Life is an art and art of living is a game. You have to give full at your part. There are the checkpoints in the life when luck decides which way to move on. So, instead of thinking about the other way, make the best out of the current. The best can be the worst of all the experiences you have but is the strongest for your future. Live the life like even if you fail, it seems that you succeed.

Have a nice life guys :)