The Jarawa is a small society of hunter-gatherers who live on the isolated Andaman and Nicobar islands in the Bay of Bengal. Their present population is estimated around 300 people. Jarawa tribes inhabit in South Andaman Islands and Western Coast of Middle Andaman Islands. They have been living here for at least fifty thousand years. They live a nomadic life and thus stay in group of 40-50 people. Most of them live in temporary huts built by woods and leaves found in the forests. To make their livelihood, they hunt pigs and eat lizards and fish. Jarawas also gather seeds, honey from the forests. They restrict themselves to their jungle domains and that is why their culture and traditions are poorly understood. The interaction activities were nil before 1997 but some of them had come to nearby towns and villages to settle and mingle with the people. But, sometimes they also make attacks on intruders inside their territory. 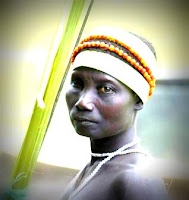 Anthropologists suggest that the Jarawa people are a sub-set of the Onge people group of the Little Andaman Island, who have migrated to the Great Andaman Island. There is supporting linguistic evidence to support the views of the anthropologists as the language spoken by the Jarawa shows considerable resemblance to the language spoken by the Onge people. Some of the Jarawa people who are getting in contact with other people have also picked up some Hindi words.

Most of the Jarawas died because of epidemic diseases like measles. Also, the tourism agencies are endangering the Jarawa people who are already on the verge of extinction. Many companies promote the chance to see or meet a real-life Jarawa in their tourism packages. Such exposures can prove fatal as they can introduce diseases and common illness to Jarawa people to which they have little or no immunity. Although Andaman and Nicobar administration has made it illegal, but still there are companies who offer the chance.

Jarawa people had been living in pure isolation for around 55,000 years. Today, a road runs right through their forest home. The Andaman Trunk Road is a 200 mile-stretch of concrete and is being used now more than ever. The Indian Supreme Court had ordered to close the _useful _road but even the court’s order is not sufficient if there is not the will to enforce the decision. Local authorities refuse to implement the rule because the road links the south Andaman to middle and north. The authorities, but tried to balance the development and preservation by imposing a buffer zone in which no economic activity is permitted. It seems to be wise but not much efficient as the road has brought with it the diseases and pollution.

The government has decided to let them decide their own future. Government is trying for minimum intervention. The Jarawas are now mostly dependent on outer food resources for their survival. For this, even food is air dropped in forest. The other thing is that people should understand that Jarawa people are also humans and no circus artist. Many cases have been reported of such kinds when tourists had made them dance for them. The people must treat them right. They are indigenous breeds and they need their own environment. The external intervention makes very huge problems for them. The thing is to let them evolve by themselves as we did.