In 2009, India (526 million tonnes) was the third biggest hard coal producer after China (2,971 Mt) and the USA (919Mt). 85 per cent of coal is produced by Coal India Limited (CIL), the world largest coal mining company, currently employing around 380,000 permanent workers and running around 500 mines in India. The one major cause of this development is the miners’ classes engaged in mining, both permanent and temporary. Mining in India is a multi-billion industry and a watch on it clearly tells how worse the condition of miners is. The local newspaper in the places engaged in mining like Dhanbad are often filled with some kind of accident or protest. Mining Industry comes under both State Government as well as Central Government. After having a look in the scenario of Indian Mining Industry, we come to know that government overlooks the mining operators and their responsibilities towards miners’ rights. The lawlessness in the mining sector is hard to ignore and prevails the whole industry. Illegality in mining causes high loss of State Government which results in unpredictable shut-down of mining operations and ultimately affecting the workers. In the last three decades, mining industry is progressing at about 4% per annum; however the price of progress is becoming high too and is being paid by mine workers in the form of their low wages and instability of jobs. 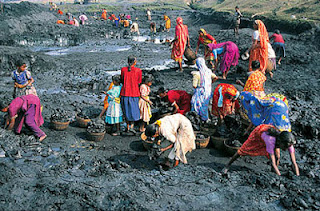 The bigger problem is the failure of key regulatory mechanisms to ensure even legal mine operators comply with law and respect human rights. The mine workers are often deprived of their miner’s rights as well as human’s rights. Mining operations often cause immense destruction when Government does not exercise proper measures for miners’ safety which is the major concern. After that, there come miners’ jobs. In 1970-1980, miners were required to be acquainting with some official to get a permanent job. The industry often gives jobs to the young people at low wages. Despite the fact that the mining industry is growing well, the profit coming out has not been grown too much. It’s not because that wages have been increased but the production output is not efficient.

Several projects do provide incorrect or deliberately misleading information to allow them to go forward. That is what like playing game with miners’ security and rights. These projects are exclusively for personal profits with no concern about miners’ development or simply their rights. These projects are thoroughly comprised of corruption and illegal activities and that’s what the starting point for them. Not only illegal operations but also 2,600 authorized mining operations in India indulge in indiscriminate mining in addition to that of illegal mining.

Mine workers are cheated of their legitimate dues. Slaughter mining, lack of conservation and unscientific mining methods are characteristics of large areas of the industry. The mine owners have been successfully preventing any further progress towards implementation of the numerous recommendations of the different committees made over the years. Rampant corruption, forced labour, dubious and duplicate records, under reporting of production, non-payment of full wages, extended hours of shift without payment, lack of safety and welfare measures, robbing of pillars of coal and shallow depth mining in a haphazard manner etc. seem to be the guiding principles of a large number of private operators. Violations of mine safety laws are widespread. The extensive fires and collapses, result of unscientific mining being practiced over the years. Mine ventilation is poor, support is inadequate, safety equipment conspicuous by their absence only. The hazards to which workers are exposed have been a matter of severe criticism.

Though the situation has improved considerably in some of the areas, many problems of the past are remained and need to be addressed sincerely at this point in time. Quest for development has to go hand in hand with rapid industrialisation. Safety considerations certainly assume more and more important position and emerge as significant factor even purely on economic considerations. Side by side modern society is also tending more and more to demand a safe and decent work environment, as a social need. We have tools and skills, and achievement with tremendous humanitarian and economic benefits is within the realm of practical possibility.

This article has been published in youthkiawaaz.com
You can see the published piece by clicking here