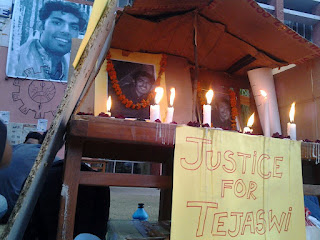 Tejasvi Pal Arora, 20, student of third year Civil Engineering in National Institute of Technology, Kurukshetra went to Jyotisar canal with some of his friends on Monday. They had consumed liquor. Some friends including him jumped into the canal. They somehow lost control. While three managed to come out but Tejasvi could not. The flow was also heavy that day due to the rain. The incident occurred around 4:30 pm. The college authority was informed about the incidence around 5:30 pm after the measures taken to save him by local villagers and the students failed. The divers were called but they refused to jump in citing night darkness and heavy flow as the reasons. The diver is said to be novice.

The students went in front of the Director Anand Mohan’s house as soon as they got to know about it. They asked him to send military divers there and start the rescue operation. One of the authority said, ‘the body of the dead student would be found in the morning.’ When students ask, ‘how can you declare him dead without finding the body?’ He said, ‘You are Engineers, you must know that no one can survive such an accident. The body will come up itself in 2-3 days.’

The students, who were with Tejasvi at canal were arrested by the police and were charged for “Attempt to Murder”. They were released at night and students were warned to call off the strike in order to get them free of Police Custody. The army could have been called timely because Ambala Cantt is just 46 km far. Students were said to go to hostel and sleep. While many students went to canal in search of Tejasvi. They said that he was a good swimmer and could survive.

In the Tuesday morning, the body was found just in 15 minutes after starting the rescue operation and that too in 100 meters upstream. After the Post-mortem report came, it was told that he was alive till 3 in the night.

The students, upon knowing it, boycotted the classes and started protest against Director in front of the Academics Block. Some students did some violence and harmed the property. They were held by the authorities there although all were not involved in the violence. The Director was said to be in Chandigarh and other authorities were talking to the students. They were unable to give explanation. Students, including girls, sat there and were displaying posters. Students did Candle march in the city.

Parents of Tejasvi said that they would see the Director in the court.

At 7:45 pm, Director came against the students but he was unable to give any logical answer to the questions of the students. The Director held a meeting inside his office with the other professors. Students sat against the gate of the admin block and locked the other doors. After nearly two hours, the Director escaped with the help of security personals. The students did not go to hostels in the night. Girls were also out of the hostel till 1:30 am.

The next day, Tuesday, students again sat against the admin block. They were waiting for the Director to talk to them. The students had decided to protest in non-violent manner. The news came that the students of third year have been suspended and they had to leave the hostel. Their gates were locked by the authorities and were not even allowed to stand in the vicinity. All the mess food was wasted. In the evening, the news came that the Director’s mother had just expired. The students observed a 2 minute silence for the departed soul. Acting Director, V.K. Arora came to talk. The students made a committee to talk to the Acting Director. They went to guest house to talk to him.

After a hectic and exhausting meeting which nearly managed to wipe out two hours, it was announced that the Director will come back after 13 days and even that was not sure. It has been presumed that a “Lathi Charge” may also be imposed on the protesting students.

Tejasvi Arora went to canal with some friends between 3 and 4 pm. The news came to the college at about 5:30 pm. The Tejasvi’s uncle reached the spot at 8 and saw no arrangements.

The students protested in front of Director’s house at 9:30 p.m. for three hours.

Divers reached at 7 in the morning and demanded motor boat. The engine was defective and students tried to run it but the operation could only be resumed after getting the other motor boat.

In absence of any ambulance of vehicle,the body was taken to LNJP hospital by an auto but was declared already dead.

Students boycotted the class and started gathering from 11 a.m. At 12:45 pm some students did violent activities and were kept held by the authorities.

DSP reached NIT at 1 and talked the students. After that, the Acting Director V.K. Arora talked with the students.

At 3:30 pm, the body was handled to the parents of Tejasvi after completion of Post mortem.

At 7:45 pm, students returned from candle march and Director came in front of the students to talk.

He left the conversation in between and went into the office in admin block.The Director escaped in 2 hours.

Notice of suspension of third year students was posted in the hostels early morning.

Around 11 a.m. students were forced out of hostels and hostels were locked.

In evening, it was announced that Director’s mother had expired.

Director was expected to address the students at 6:30 pm but he did not came.

Acting Director, V.K. Arora talked with the students for some two hours in Guest House.

Official Condolence is in the evening.

Candle March will be done by students in the city.