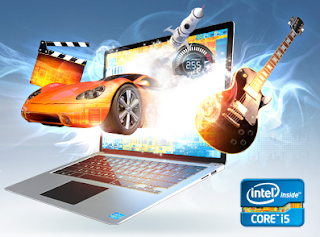 I've bought a new laptop and it has intel 3rd generation i5 processor. So, obviously, I researched about it. So, I thought that I should tell you people about it. _(I'm so good, amn't I?:D) _Won't be discussing full specs but just the main features.

The new intel 3rd generation processors have new graphics card, Intel HD graphics 4000, which are far better than the previous ones.

The new 3rd generation has Intel Turbo boost Technology 2.0 which means, you can now enjoy your powerful games much better. The CPU's overclock speed is improved by it. Again for your knowledge, I tell you, whenever you play games or do heavy tasks CPU's clock speed is increased automatically to some extent. This process is called overclocking (It works in Android mobiles too). Means, you get more speed than your processor's normal speed at the time of need. It does work whenever you need it because, otherwise, it can blow your CPU off.

It has also better 3D Visual effects and all thanks to advanced Intel HD graphics 4000.

The thing is, they are ultimate fast and ultimate. If you have used even 1st generation Intel processors, you still can't wonder, how fast it can be, because they themselves are very fast.