Me alone doesn't matter- The most common statement most of us make to be in safer side. This article is for those people who do use this statement at the times when they need to do something and also when they must not do something.

These people don't contribute in the country's development but they have a very high percentage of contribution in country's anti-development.

These dirty people, spread dirt everywhere. Either be some wall or any station or any road or roadside. They don't leave any place to mark their marks. These pissed off people piss on the walls, they don't use urinal but its wall. They throw away the empty bottles, beverage wrappings, and all the other things they can throw off, on the roads and railway tracks. See the irony, these people want to teach their kids good manners but they teach them how to throw the Lays empty packet out of the train or bus. They can put their wastes in some poly bag and show them the dust bin, when available. But they feel it awkward because its not the trend. If a person is standing in a queue and he is the only one who is maintaining himself to be in queue then he feels awkward because he is not following the trend. If government has banned smoking in public place, so can't these people stop it? They ought to respect government rules. They are too stub-born to put one police man behind each such person to stop them from spitting, or smoking, or throwing their wastes in/on wrong places. But it is not practically possible. They say- If we won't then others will, so we can't bring the change.
_
_
Yaa, you can't but we will bring the change.

I tell you, Act like humans or we have the legs to throw you away. India's gonna change. Protect your butts ,cause we(the other category of people) don't have any other choice other than playing football*_ with them._*
Good day guys... 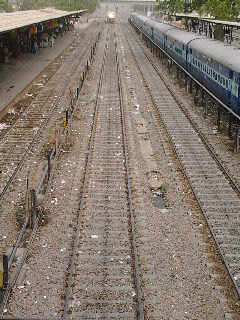 The scene of Hisar Railway Junction.